Snuff is part of a very long ongoing series—too long to review each individual book. So today's illustrated review comes bundled with an illustrated primer! 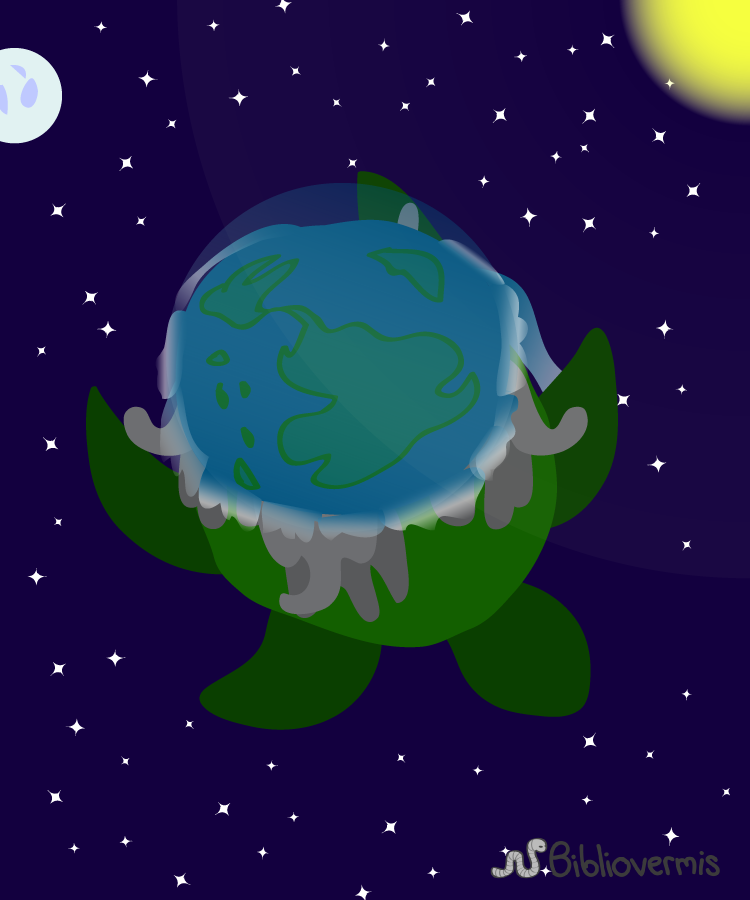 There are 39 Discworld books (four of which are the Tiffany Aching series), not including picture books and other supplemental materials. Some of the books are once-off depictions of life on the Discworld, but more usually they follow particular sets of characters, and the books can be broken up into several series or story arcs. Snuff follows the continuing adventures of Sam Vimes and the Ankh-Morpork City Watch, which is one of my favorite story arcs in the Discworld universe.

The following is an outline of the previous books in the City Watch series. 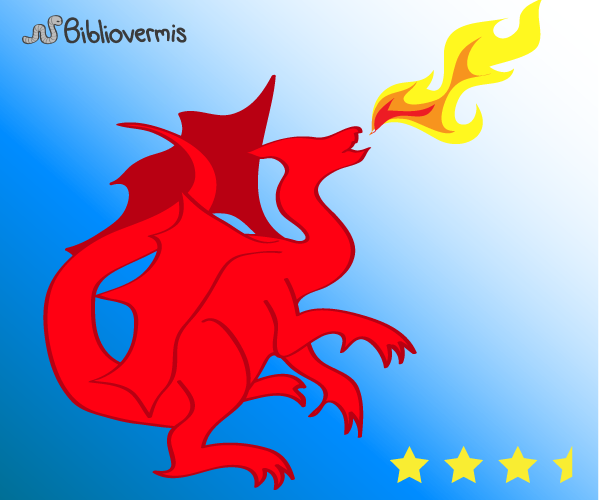 The Night Watch of Ankh-Morpork, the refuge of drunks, layabouts, and cowards, is greatly fallen from a once venerated position—but Carrot Ironfoundersson, a human raised by dwarves, doesn't know it. His arrival and sense of right and wrong turn the Night Watchmen into a tailspin, especially Captain Sam Vimes, whose own long-unsatisfied sense of justice is regularly drowned with heavy drinking. At the same time, a "noble" dragon—a creature thought not to exist—has appeared and is terrorizing the townsfolk... 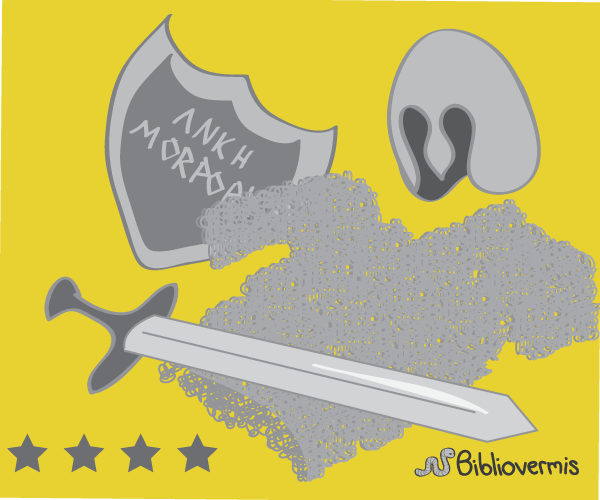 Intrique abounds in this novel about political machinations, and the Night Watch is caught in the middle. Someone claims to have found evidence that a member of the Royal Family is alive and well—and they can prove it. This could threaten the rule of mostly benevolent dictator-for-life Lord Vetinari—although it basically never works out for them, Ankh-Morporkians have a strong attraction to royalty. At the same time, people have begun dying, murdered with a strange new weapon... 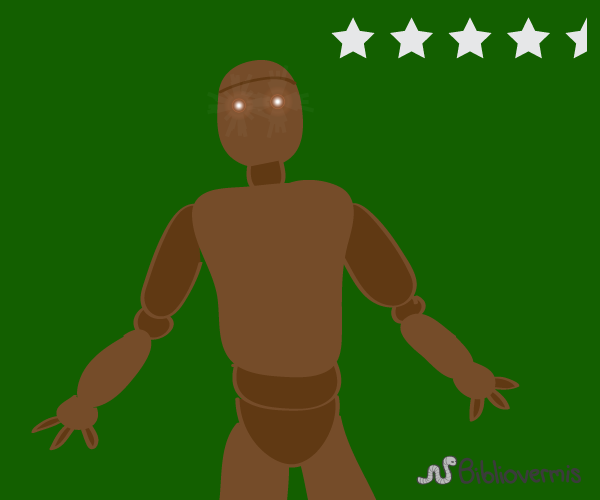 Strange murders are happening, Golems are committing suicide, and Lord Vetenari has been poisoned. The City Watch is on the case, led by Sam Vimes—but first he must keep all his officers, a motley crew of humans, dwarves, trolls, and a werewolf, off each other's throats. This book about diversity, nobility (literally and figuratively), and the desire for freedom is one of Pratchett's best. 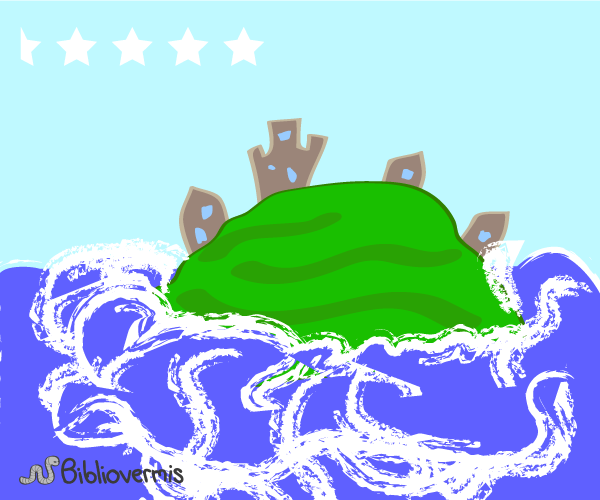 Ankh-Morpork is on the brink of war. The small island of Leshp has risen, like a buoy, from the Circle Sea. Although it's tiny and honestly not very useful to anyone, the citizens of Ankh-Morpork and their historical enemies the Klatchians each claim title to the land based on ancient (and pretty dubious) claims. Can Sam Vimes and the City Watch stop the seemingly unstoppable drums of war? Is everyone going completely mad? Where did this island come from, anyway? 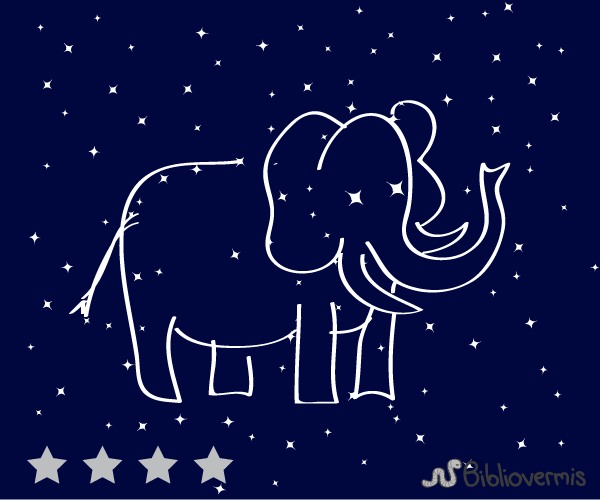 When Lord Vetenari makes the Commander of the City Watch his official diplomat to lawless, distinctly human-unfriendly Uberwald, you can bet there are machinations afoot and mysteries to solve. Where is the fabled fifth elephant, absent from its spot holding up the Discworld? What is going on in the dwarf caves of Uberwald? 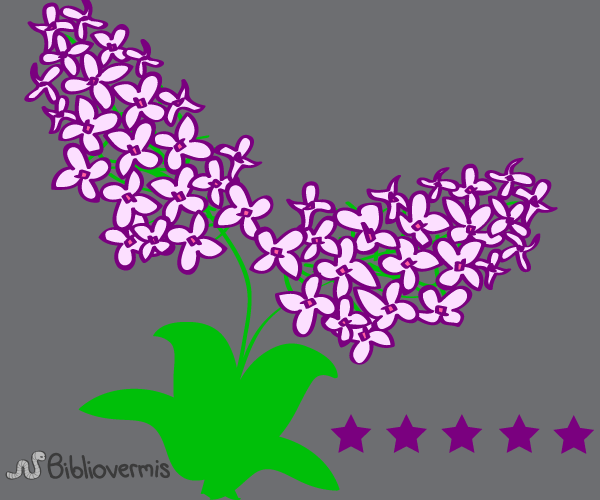 This installment in the City Watch is far more serious than usual Discworld fare. On the 30th anniversary of the Glorious Revolution of the Twenty-Fifth of May, Ankh-Morpork Watchmen pay homage to their brethren, fallen in the battle between soldiers and rebels. But Sam Vimes, chasing a criminal across a city rooftop, is about to do more than wear a flower. He's about to experience it all again... 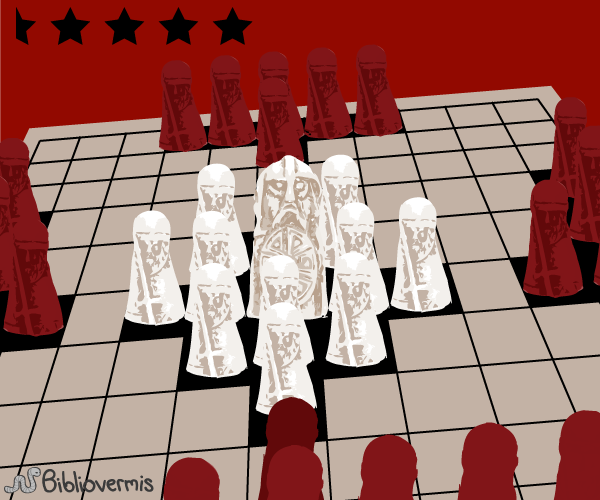 The dwarves and trolls have been enemies almost as long as anyone can remember—at least, ever since the extremely bloody, constantly contested Battle of Koom Valley. As the anniversary of the battle looms, ethnic tensions threaten to engulf the city of Ankh-Morpork. But Commander Sam Vimes has much more important things to worry about—specifically, being home at precisely six p.m. to read Where's My Cow to his son, young Sam.

which brings us to... 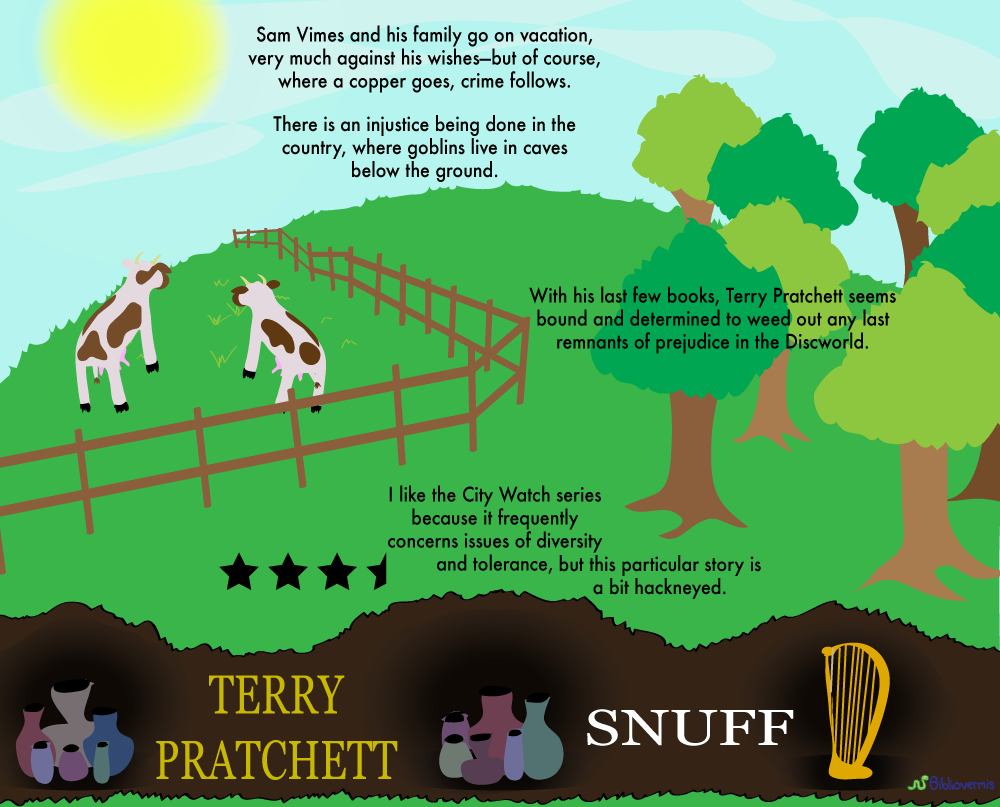 It has a different villain from the usual. Previously, there has been a reachable villain, or a small group of privileged individuals. This time, the villain is the whole of human society, with the possible exception of Sir Harry King, who is an exploiter but who at least pays the goblins something for their work. In Snuff, Vimes has no support at all to begin with, aside from Willikins. Even Sybil has to be won over. There is a real risk that Sam won't be able to win this time; the last time he took on the upper classes directly, in Feet of Clay, the story ended in a frustrating draw, where even Vetinari couldn't do much.

I don't find it similar only to other City Watch books, but to Unseen Academicals as well, which was about football and changing the public opinion of Orcs. In fact, I Shall Wear Midnight was about overcoming sudden prejudice against witches. I'm not complaining about that theme at all—it's a good one. But in this book it really seemed like Pratchett was reaching the bottom of the barrel. I was disappointed that the goblins achieving rights didn't seem to have anything to do with their own culture and contributions they could make to the wider world from that, or even that the other species didn't just say "Wait a minute, these creatures are sentient! This is wrong!" Instead, it came from a sudden affinity for music that was never even foreshadowed in any other mention of goblins in a Discworld book. With all the other creatures having been crafted so carefully over such a long period, I found this disappointing.

Goblins have never appeared in any other Discworld book. They were mentioned, but did not appear, in Unseen Academicals, and nobody knew anything about them except that the only person who had ever tried to study them was disgusted. That was rather the point, that nobody knew anything about them. So there was no way any foreshadowing could have been done. Did you object to the introduction of the orc? We never heard of Discworld orcs before UA. How about the introduction of the Feegles in Carpe Jugulum? There hadn't been any mention of them before either. It's rather odd to complain that Pratchett is repeating himself because he introduced something entirely new to the series. Also, the goblins haven't achieved rights yet. There are a few movements afoot to make it happen, but so far, they still need to hide.

I'm not sure if you're right about goblins not appearing before. If they are only mentioned, they are mentioned quite a lot. The concept of their practice of unggue is pretty well developed prior to this book. I am not complaining that Pratchett is repeating himself at all (other than in the plot of species/ethnic diversity and tolerance, which I've already said I'm not complaining about). Rather, I'm disappointed that his development of the goblins wasn't more creative or compelling—Pratchett's Orcs aren't really a good comparison, since they were very much an homage to Tolkien Orcs and didn't require much unique development, but your mentioning the Nac Mac Feegles provides a great example of creatures that I thought Pratchett developed wonderfully and skillfully. They had a great deal of personality and unique cultural/physical traits that made them a wholly new asset to the rest of established society. That's something I felt this story didn't allow the goblins; instead of giving them some way to contribute that built upon their already established practice of unggue or on some other, newly developed practice, trait, or skill Pratchett made up for them, a human just taught them music and they were pretty good at it. Are all goblins just supposed to become musicians now, since that's apparently all they have to offer? That's the impression I got, and I found that disappointing. Of course, you are very welcome to disagree with that assessment.